Avalon Instruments has released a new version of its M-zero LHQ Telescope Mount specifically designed for use in low latitude areas down to 0 degrees. The new M-zero LHQ mount follows the tradition of previous M-zero versions and offers the perfect lightweight and portable instrument for travelling astronomy. The M-zero LHQ comes with four degree ranges available: 0° – 15°; 15° – 45°; 30° – 55°; and 55° – 70°. 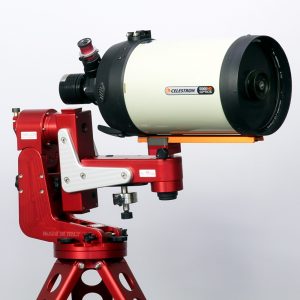 Thanks to the Dual-DEC system (or by utilizing the optional Avalon Instruments X-guider accessory), it is possible to mount a second telescope in the opposite side of the declination axis. This creates the possibility to use a great range of optics starting from a small refractor up to a double setup with a total weight of 12-13 kg (26.4-28.6 lb).

Thanks to the mount’s StarGO GoTo Control System the M-Zero can be controlled by smartphone and tablet via Bluetooth or WiFi connection.

The M-zero LHQ Telescope Mount is made entirely from CNC anodized aluminum. The mount weighs only 6 kg (13.2 lb) and when combined with Avalon Instruments new T-Pod 90 tripod, reaches a total weight of only 12 kg (26.4 lb).

Polar alignment can be performed by using the polar scope mounted on the RA body that can be rotated to the upper position for comfortable adjustment of polar alignment.

– Transmission system: An all belt drive system based on a four-stage reducer. All the movements are on ball bearings. No maintenance and no backlash system. Pulleys are made with special polymer fiberglass charged and high precision toothed belts.

– Warranty: 2 years from the purchase date, extended to 5 years for the transmission system

You can learn more on the Avalon Instruments website.