Xerxes Scientific launched last year with the purpose of creating semi-custom telescope mounts and control systems for astronomical imaging. Their initial product designs were the D11 and D21 direct drive modules which are part of their modular telescope mount system, which can either be incorporated into custom telescope mounts or be provided with mounting hardware in kit form for ready assembly and installation at the customer’s site. 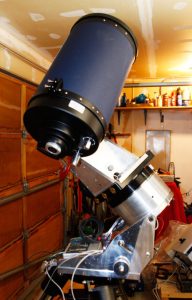 The company has just released an engineering prototype of a new single arm mount intended for smaller scopes and for portable use. The arm (containing the Dec drive and electronics) is separable from the RA drive, which in turn is shown in the image on a Millburn wedge which was slightly modified. All the loose wires and clamps and such are only for the prototype, and a set of carbon fiber covers is not shown in the image.

The mount offers a “semi-offset” design in which the Dec axis is substantially displaced from the RA but not enough that the OTA centerline crosses the RA axis. Most installations will have no meridian flip (which is the intent). A small auxiliary counterweight shaft will be included and also the arm can be slid laterally in the dovetail saddle.