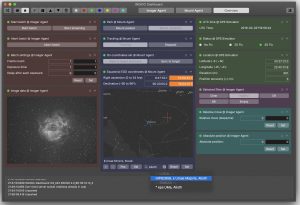 INDIGO is a system of standards and frameworks for multiplatform and distributed astronomy software development designed to scale with a specific user’s needs. INDIGO is a product of the INDIGO initiative, group of amateur/professional astronomers, software developers and hardware vendors

The organization explains on its website why the initiative was created:

Yes, there are other standards and initiatives for astronomy software development. Some of them well established, accepted by the industry, nevertheless Windows only, locked to .Net technologies and without any clear strategy towards IoT and distributed computing. And another with opposite approach. Easy to port to Unix based systems, fully distributed, but not enough standardized in many aspects, quite inefficient for large amount of data and published under license avoiding real commercial use in many situations and thus wider industry acceptance.

That’s why we began development of INDIGO framework with the goal to take the best from the both worlds – community driven, open to everybody, portable, distributed, efficient, easy to use for developers and invisible for end-users.

Why use INDIGO instead of ASCOM and what makes it different? INDIGO and ASCOM are two fundamentally different approaches to the same problem. First, INDIGO is multiplatform and ASCOM is Windows only.

Second, with ASCOM all your devices need to be connected to a single Windows host and all the user applications should run on this very PC, so no remote operation unless you use some sort of screen sharing. INDIGO is distributed and all devices can be connected to different hosts running different operating systems.

Currently Linux and MacOSX however INDIGO should work on all POSIX (Unix) compatible operating systems. Windows support is coming soon.

For astrophotographers using MacOSX products, the initiative has recently introduced INDIGO Dashboard, a versatile tool for a low-level control of embedded or remote INDIGO Servers. It combines the server itself, the control panel and the set of up to eight configurable dashboard workspaces. Each of them can contain any number of property widgets pinned from the control panel and arranged according your need.