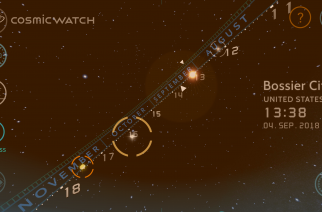 The Cosmic Watch iOS and Android apps marry the functions of a world clock and an astronomical clock into a beautifully-rendered, uniquely-instructive interface. Celestial Dynamics, the apps developer, refined the functionality of the app in Version 2.0 and has produced a short video that highlights the recent improvements. The big […]