Sky-Intella-Blu is a wireless Bluetooth adapter for the Orion Intelliscope to interface with SkySafari on an Android tablet or smart phone to provide rapid targeting on the fly. As the creator notes, “Exploring the universe with a computerized “push to” telescope is just a whole lot cooler with this!” 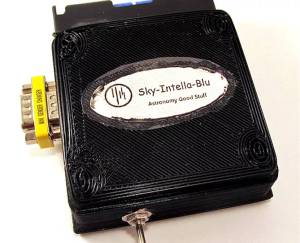 The Bluetooth adapter has been configured and specifically set up to connect the Orion Intelliscope to SkySafari. The advantages of using the Sky-Intella-Blu include:

– No more blind “Hot Potato” pointing game using the larger/smaller – left-right/up-down direction arrows for ALT and AZ movement on the Orion hand control. See and push to objects at will.

– The SkySafari database provides the ability to search for objects, object information, push to direction, observing lists and vast database which, with the Sky-Intella-Blu, are now interfaced to your telescope for a more robust observing experience.

– No more object numbers to input.

– Fast location as the computerized “push to” can be as fast as “go-to.”

– More accurate alignments as SkySafari has GPS/time/location info in its star map.

– No more green hand control as your Android phone or tablet is now your screen. Red “night mode” is also available in SkySafari.

– Works with existing encoders so there is no need to change or replace any Intelliscope hardware.

– Fine tune alignment as you go as SkySafari allows for ten alignment objects.

– Easy battery replacement with no difficult compartments to open. Power and charger are included.