The Antlia Solar Wedge offers a Herschel Wedge design which replaces the standard prism diagonal at the rear of refractor telescopes to enable imaging of solar granulation and sunspots.

The Herschel Wedge design is well known to give sharper, higher-contrast images while transmitting  a greatly reduced, safe amount of light to your imaging system. The image brightness can be conveniently increased or decreased using a control ring with aperture blades, similar to that used in camera lenses. 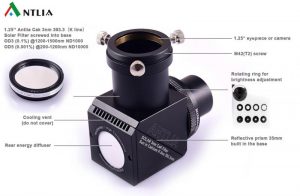 Unlike some other solar wedge designs which may get too hot during use, the Antlia Solar Wedge directs energy into an extra thick Polycrystalline Ceramic diffuser plate at the rear of the wedge. In addition, cooling vents above the ceramic plate facilitate efficient cooling of the system.

The internal Antlia CaK 3nm solar prism system provides for the safe management of harmful light intensity and heat when imaging the Sun. The system is comprised of a prism, CAK lens filter, Sun centering finder and a heat dissipation system. The Sun’s light passes through the right-angle prism and excess heat is transferred to the rear fins that act as a heat sink for cooling the instrument. This heat management system effectively keeps the instrument at safe operating temperatures

A high blocking specification of OD5 (0.001%) between 200-1200nm wavelengths and OD3 (0.1%) between 1200-1500nm wavelengths delivers superb resolution for imaging with the Antlia Cak 3nm solar filter.  It should be noted that the bandpass for Cak (393nm) makes solar features almost invisible to human vision because of the eye’s low sensitivity and poor resolving ability at the CaK frequency. Hence, the Antlia Solar Wedge with CaK filter is not recommended for visual observation. It is designed for imaging with cameras that have spectral responses well beyond human vision.

The Antlia Solar Wedge specifications and features include:

– High-resolution imaging of granulation, sunspots, and other features-

– The wedge is intended for imaging only and is not suitable for visual observation.

– The wedge is not intended for solar prominence imaging and visual.

– The wedge must only be used with refractor telescopes to avoid damage to the unit.

– Refractor aperture must be no larger than 120mm or, focal ratio of F5.5 or longer.

You can learn more at here. 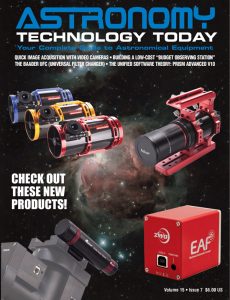