The Rainbow Astro RST-135E GoTo Mount is an ultra-portable, high capacity GoTo Mount with Harmonic Drives. The “E” designation is a new version of the mount that eliminates the need for an auto guider system with the addition of a Renishaw encoder. 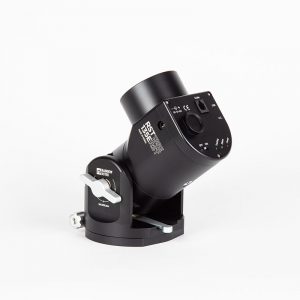 The high-resolution encoder from Renishaw is built into the RA axis. As a result, a periodic error of only ±2.5 seconds has been achieved. Choose the RST-135E mount if you are bothered or reluctant to use autoguiding.

The Rainbow Astro RST-135E GoTo Mount is a robotic mount which uses a type of gear called a strain wave gear. Due to the strong force provided by the strain wave gear and motor, a counterweight is not needed. The mount weighs in at only 3.3kg (7.27lbs) and can carry a payload up to 13.5kg (29.76lbs). Rainbow Astro calls this mount a “Weightless Mount,” as the volume and weight of the mount are very minimal when travelling for astrophotography.

The strain wave gear is a type of gear that is widely used in industrial robots. Strain wave gearing offers an ingenious way to produce a high-efficiency, high ratio gearbox within a small space. It involves an outer fixed ring of gear teeth and an inner flexible ring of teeth which are made to mesh with the outer by means of an oval rotor distorting the ring. The RST-135E offers extremely fast slewing – 6º/second and low power consumption – 0.2A tracking / 3A slewing (at 16V)

The Rainbow Astro RST-135E GoTo Mount offers built-in Wi-Fi and can be controlled and auto guided without a cable. The built-in GPS receiver eliminates the need to enter your location during each session or if you travel with the mount. The home sensor finds the mechanical origin of the mount for remote use.