The Celestron Lunar and Planetary Filter Set provides four filters that can be used to bring out details on a planet’s surface or its cloud structure. All of the planetary filters included in the set can be used on any 1.25” eyepiece with the proper filter threads, so they are very versatile. Just screw one onto the eyepiece of choice and slide it into the focuser. 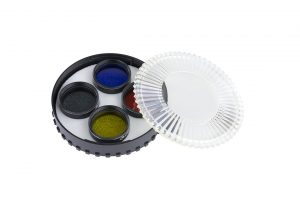 Deep Yellow – A good general purpose filter for smaller aperture telescopes (less than 4.5”), the #12 Yellow will improve the contrast of features on the Moon. It will also help you see the equatorial belts on Jupiter and Saturn, clouds and the polar ice caps on Mars, and the dusky detail on Uranus and Neptune.

Orange – Sharpens the boundaries along the plains of Mars due to the reduction of blue/green transmissions. Use on Jupiter and Saturn to enhance detail in the belts and polar regions.

Blue – Enhances the contrast of the cloud belts on Jupiter and the polar ice caps on Saturn. It also can be used to increase contrast on the Moon if you don’t mind the color shift.

Neutral Density – A great filter for the Moon, and for stacking with other planetary filters to increase density without changing the color. A neutral density filter is also useful when splitting binary star systems (double stars). Use anytime you want to decrease brightness but don’t want to affect the color characteristics of an object.

Each Celestron 1.25” filter has 26mm of clear aperture, and is mounted in a black anodized aluminum cell that is threaded on both sides. Double threads allow the user to stack different filters together to create a custom color or affect the transmission percentage. Special coatings on each filter protect against reflections, ghosting, and scratches. A plastic case is included to keep your filters safe when not in use.