Over the past few years, there has been a revolution in planetary imaging among amateur astronomers. CCD sensors with high sensitivity have made it possible to rapidly obtain large numbers of short-exposure images of the planets. This coupled with powerful computers has allowed amateur astronomers to image the planets with higher resolution than previously possible. 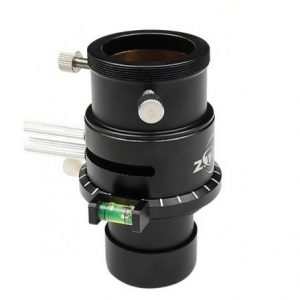 The main limitation to high-resolution planetary imaging has been atmospheric turbulence. The best views of the moon and planets are generally obtained when they are observed at high elevation angles. When a planet is 30 degrees above the horizon, there is twice the amount of atmosphere to look through as compared with observing the planet at zenith.

Therefore, collecting imagery when the planets are high in the sky is a good strategy. However, unless one lives near the equator, the planets may often be found at lower elevations. For example, Saturn is currently moving into a part of its orbit that will result in low elevation angles for Northern Hemisphere observers during the next 10 years. Also, Mars was seen at low elevations from the United States during its close opposition in 2003.

In addition to turbulence, the atmosphere creates another imaging problem referred to as differential atmospheric refraction. In effect, the atmosphere acts as a giant, but very-weak prism. Blue light is bent downward more strongly than red light. This results in a smearing of planetary imagery into a vertical spectrum. The amount of this smearing depends on the planet’s elevation angle.

The ZWO ADC uses a pair of prisms that can be precisely adjusted with manual levers to apply the opposite dispersion induced by the atmosphere. The device then directs all colors of light to re-converge at the focal plane. The adjustment can range from null (no correction) to maximum refraction suitable for correcting for the effect of atmospheric dispersion at a range of altitudes above the horizon.

The ZWO Atmospheric Dispersion Corrector consists of three pieces. The main body holds the corrective prisms and adjustment levers. It includes two lever slots that overlap to allow both levers to move together over a wide range. There’s also a 1.25″ barrel adapter for the bottom of the main body to mount to a Barlow, and another 1.25″ adapter for the top of the body to accept the camera or eyepiece. The outside of the top eyepiece/camera holder also includes male T threads to allow you to directly mount a camera with the appropriate threading.

The ZWO ADC works best at large focal ratios, so you get optimum results when you place the device between a Barlow lens and the camera or eyepiece. The body of the ADC also has a white locking screw on the scale to mark the null point about which the levers are rotated to get the optimum correction of a given planet at a given altitude. This allows you to finely position the null point without having to rotate the body of the ADC. The levers also have an adjustable frictional resistance for ease of use.

The prisms in the ZWO ADC have a 2 degree deviation angle and are made from H-K9L (Schott BK7) glass with surfaces polished to 1/10 wave accuracy. All optical surfaces are AR-coated to ensure >98% transmission over the visible spectrum.