The ZWO ASI2400MC Pro is the first CMOS astronomy camera with a Sony Full-Frame IMX410 Sensor. Utilizing Sony’s latest back-illuminated IMX410 14-bit ADC sensor, this one-shot color imager is a 24 megapixel full-frame camera that provides 5.94um pixels that can accommodate a large full-well depth of 100ke and high dynamic range. With an ultra-low readout noise of 1.1e and zero amp-glow, the ZWO ASI2400MC Pro is yet another great innovation by ZWO in the field of full-frame cooled one-shot color (OSC) camera that is an astronomy imaging option for experienced and beginning imagers. 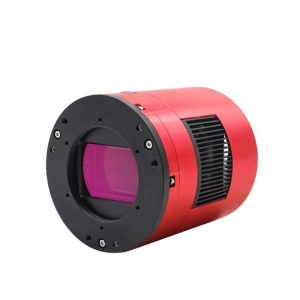 The back-illuminated 36mm x 24mm IMX410 CMOS sensor improves sensitivity and noise reduction – two key factors to enhancing image quality, while realigning their fundamental pixel structure from front-illumination to back-illumination. The camera does this while retaining the advantages of CMOS image sensors such as low power consumption and high-speed operation.

With a conventional CMOS front-illumination structure, the metal wiring and transistors on the surface of the silicon substrate that form the sensor’s light-sensitive area (photo-diode) impede photon gathering carried out by the on-chip lens. A back-illuminated structure minimizes the degradation of sensitivity to optical angle response, while also increasing the amount of light that enters each pixel due to the lack of obstacles (such as the afore mentioned metal wiring and transistors that have been moved to the reverse of the silicon substrate).

The full-well depth of the ZWO ASI2400MC Pro is 100ke which is 132% greater than the ZWO ASI128MC Pro camera model, despite the similar pixel size of these two cameras. This means the ASI2400MC Pro comes with an ultra-high dynamic range of up to 14 stops, reducing the chance of overexposure and adding a richer color gradation. When the gain value is set to 140, the HCG high gain mode is turned on and the readout noise drops as low as 1.1e while the dynamic range remains basically unchanged.

The ASI2400MC Pro removes the worry of amp glow as it uses zero amp glow circuitry, so you won’t have to worry about amp glow even when using high gain, long exposure imaging. And dew isn’t a problem either, as the camera comes with a polyimide heater that greatly reduces dew formation on the camera window. The anti-dew heater draws about 5W and can be turned off to save power.

The ZWO ASI2400MC Pro is equipped with a USB 3.0 transmission interface and a built-in 256MB(2Gb) DDR3 cache to ensure stable and secure data transmission. Under long exposure, it effectively avoids frame dropping and greatly reduces the glow effect caused by slow reading speed.