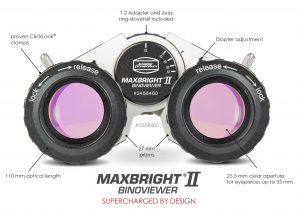 The new MaxBright II was conceived as a more compact and lighter option to Baader’s flagship Mark V Großfeld (Giant)-Binocular which is now in its fifth edition of the former Carl Zeiss giant binocular with 30 mm prisms. The MaxBright II was designed to offer all of the advanced features and build quality as the V Großfeld.

The housing of the MaxBright II 27mm large prisms is made with Baader’s in house die casting molds, using Carl Zeiss production drawings. The non-slip leather finish provides extra grip when holding the binoviewer with heavy eyepieces in your hand.

On the eyepiece side, the newly designed, self-centering Clicklock eyepiece clamps with diopter adjustment offer an ease of functionality that is immediately noticeable upon using. Thanks to the ergonomic design, you can blindly distinguish between clamping and diopter compensation even in the dark. The inner parts are made of stainless steel for maximum stability and the high-quality eyepiece clamps are part of a precisely collimated optical system, which is designed for the highest magnifications.

All optical surfaces of the Maxbright II feature a 7-layer multi-coating. The prism chairs (mounts) of the prisms are constructed like those of the Baader Mark V Großfeld (Giant)-Binocular. The clear aperture is 26 mm on the telescope side and 25.5mm on the eyepiece side. In comparison to models with smaller prisms you can see a much larger part of the sky at the same magnification.

On the telescope side, either a T-2 cap nut or a dovetail ring with original Zeiss micro bayonet are available – both connection options are included and allow a very compact adaptation to all common threads as well as Baader T-2 prisms and mirrors. Compared to fixed nosepieces, this effectively saves a lot of backfocus.

The MaxBright II is compatible with all Baader Glasspathcorrectors. According to optical calculations by Carl Zeiss, these correction lens systems shift the focus outwards so that you can still reach focus despite the approximately 11 cm back focus (the required inward travel of the focuser) of the binoviewer. The Glasspathcorrectors also compensate for the color error that would otherwise be introduced through the prisms when using telescopes between f/4 and f/7. Glasspathcorrectors are not simple Barlow lenses, even if they resemble them. For this reason, in Germany the name Glaswegkorrektor is a protected trademark by Baader Planetarium. 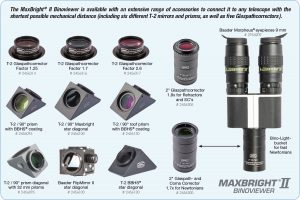 In combination with a lens telescope or a Schmidt-Cassegrain Baader recommends the Baader T-2 Stardiagonal (Zeiss) Prism with BBHS ® coating (T-2 part #01B) or the Baader FlipMirror II Star Diagonal, to achieve a compact telescope adaptation. In addition, you can then choose a matching Glasspathcorrector.

To select the right Glasspathcorrector, you need to know the backfocus of your telescope. You can read how to do this in the Manual of the Maxbright® II Binoviewer.

You don’t necessarily need a Glasspathcorrector for Schmidt-Cassegrains with f/10. Especially for lower magnifications and thus larger fields of view, Baader’s Alan Gee Telecompressor Mark II (T-2 part #20) is more interesting as it shortens the focal ratio to f/5,9, which gives you a brighter image and a larger field of view. So, a C8 almost becomes a rich-field telescope – for comfortable observations with both eyes open.

The Baader Planetarium team notes when commenting on using their binoviewer systems, “One often hears the criticism that using a binoviewer would split the light into two visual channels and that only 50% of the light intensity reaches each eye. This argument prevents many people from trying out for themselves what a revolutionary effect binocular vision has. But what is forgotten is that 50% of the light reaches each eye and that the energy from both eyes is “reunited in the brain” (more precisely, in the back of the head). What you then see is by no means 50% darker than it is claimed. The real gain is only visible for someone who has tried it out for himself and has familiarized himself with this kind of seeing for a few minutes. Ultimately, the object doesn’t look darker, but becomes visible effortless, more detailed and – more beautiful.”

Specifications for the MaxBright II Binoviewer include:

In addition to its recent release of the MaxBright II Binoviewer, Baader Planetarium has announced a number of new accessories to enhance the usability of the new binoviewer.