The Lowell Observatory Giovale Open Deck Observatory features one of the finest collections of telescopes available for public observing in the world. It was dedicated in October as part of the celebration of the 125th anniversary of the Lowell Observatory. The facility is named in honor of longtime Lowell supporters/advisors John and Ginger Giovale, who made a lead gift for the project. 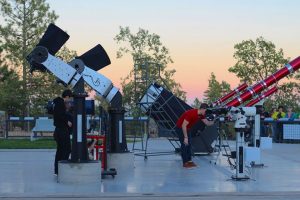 The observatory is the first phase of a long-range expansion plan. The new Lowell Observatory  complex consists of a 4,300-square-foot, elevated plaza along with a roll-off building housing a suite of six advanced telescopes. These are used for direct observing through eyepieces, as well as projecting images and spectra onto monitors. To make sure everyone can enjoy the views provided by the facility, three of the telescopes with eyepieces can also be lowered and raised for ADA accessibility.

The Lowell Observatory offers six advanced telescopes installations which will collectively give visitors a viewing experience that will surpass even the most ambitious astronomy gear dreams for the seasoned amateur astronomer. From rich star fields and planets full of color, to nebulae and galaxies that reveal obvious structure, the famously dark skies of Flagstaff are abundant in celestial treasures available through these instruments.

Check out this eye-popping lineup!

– A 32-inch Starstructure Dobsonian reflector, powered by a gargantuan quartz mirror made by Lockwood Custom Optics, for splendid eyepiece views of nebulae and galaxies that reveal detailed structure.

– A 17-inch PlaneWave CDK catadioptric reflector equipped with a Shelyak spectrograph to reveal the elemental components of a star field in real time.

– A 14-inch PlaneWave CDK catadioptric reflector equipped with a MallinCam CCD camera to show more details than your eyes can see alone.

A Deep Dive Into the Lowell Observatory Equipment

Rarely has an educational outreach program dived this deep into what is available from the amateur astronomy products community for access to the general public. As the facility notes in its promotion of the new complex, “The future of stargazing comes to Lowell Observatory with the Grand Opening of the Giovale Open Deck Observatory.” Here is a rundown of the equipment and the observatory team’s rationale in utilizing the technology. 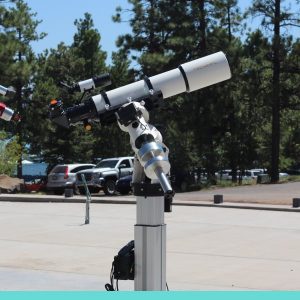 Why Lowell staff chose the scope: The 5.5-inch TEC wide-field refractor was selected to give guests stunning wide-field views of rich star fields and celestial objects that are too large to fit in the field of view of most telescopes. The 3-degree field of view at low power allows guests to see the entirety of objects like the Andromeda Galaxy (M31), the Lagoon Nebula (M8), the Pleiades star cluster (M45) and the full moon.

The telescope uses an oil-spaced triplet lens apochromat system with one element made of extra-low dispersion calcium fluoride crystal, which together eliminates the color fringes that can be often found in other refractor designs. When needed, the telescope can use high magnifications to allow detailed views of the planets and other smaller objects like globular clusters and planetary nebulae. 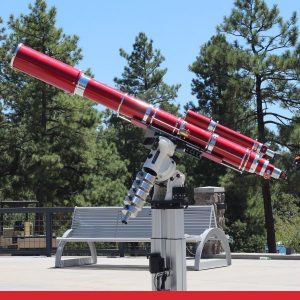 Why Lowell staff chose the scope: The 8-inch Moonraker Victorian refractor is a stunning sight by day and a treat to look through at night. A blend of Victorian styling and modern technology, this 10-foot-long, red and chrome Steampunk telescope echoes the Lowell’s 1896 24-inch Alvan Clark & Sons refractor while in the same moment looking to the future.

Like the Clark, the new Moonraker uses a superb two-lens design that results in outstanding views of celestial objects under high power. Planets like Mars, Jupiter and Saturn show wonderful detail and color. Distant globular star clusters are resolved to their cores, giving them a three-dimensional effect. True to its name, the Moonraker is also an ideal instrument for observing the Moon and the structure of its craters, which appear in beautiful relief. 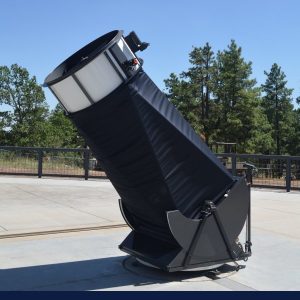 Why Lowell staff chose the scope: The 32-inch Starstructure Dobsonian reflector is now the largest telescope on Mars Hill (Flagstaff locals refer to the mesa on which the facility sits as Mars Hill). Its gargantuan 32-inch diameter mirror gathers almost twice the amount of light that the 24-inch lens system of the Lowell’s 1896 Clark refractor gathers. The quartz mirror keeps its precise shape no matter how low the temperature drops at night.

The large light-grasp of this telescope makes deep sky objects (galaxies, nebulae and star clusters) appear very bright and reveals a high degree of structural detail in them. In it, you can clearly see the wispy clouds of gas and dust that make up the Swan Nebula (M17) , the bright, structured smoke ring of the Ring Nebula (M57) and the two spiral arms of the Whirlpool Galaxy (M51), one of which is interacting with a nearby companion. 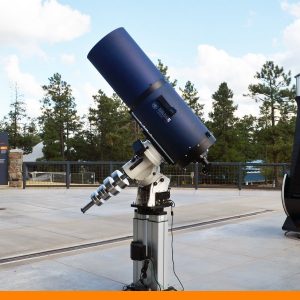 Why Lowell staff chose the scope: The  LX200 ACF 16-inch Meade ACF reflector is a workhorse telescope that shows crisp views of everything from planets and star clusters to nebulae and galaxies. It catadioptric (lens and mirror) optical path uses two mirrors and a corrector lens to fold the light path inside the telescope. This particular design corrects errors at the edge of the field of view, so that every star looks sharp.

The long focal length of the Meade ACF offers the narrowest field of view of any of the telescopes of the Giovale Open Deck Observatory. When combined with higher magnification, it produces wonderful views of smaller objects like planetary nebulae, smaller star clusters and double stars, and it can show great detail on planets like Jupiter and Saturn. 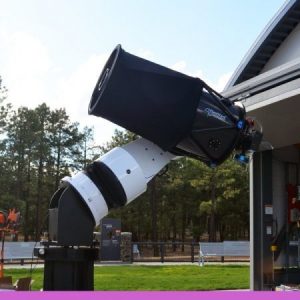 Why Lowell staff chose the scope: The 17-inch PlaneWave CDK reflector is equipped with a Shelyak spectroscope that can show real-time spectra from a variety of objects in space. The PlaneWave CDK reflector uses two mirrors to fold the light path inside the telescope, plus a lens system to eliminate any aberrations. This results in a telescope that is especially well-suited for astrophotography and instrumented observation.

The Shelyak spectroscope mounted on the 17-inch PlaneWave is connected to a video monitor in order to show the frequencies of light that are emitted from a celestial object. This information reveals the compositions of stars, nebulae and galaxies, as well as how fast they are moving away from or toward us here on Earth. This is a core type of information that many astronomers collect as they conduct their research. 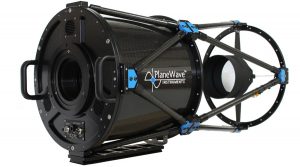 Why Lowell staff chose the scope: The 14-inch PlaneWave CDK reflector is equipped with a MallinCam SkyRaider color video camera to show detailed images of deep sky objects in real time. The PlaneWave CDK reflector uses two mirrors to fold the light path inside the telescope, plus a lens system to eliminate any aberrations. This results in a telescope that is especially well-suited for astrophotography and instrumented observation.

The MallinCam SkyRaider color video camera mounted on the 14-inch PlaneWave is connected to a video monitor in order to show live, time-integrated images of celestial objects that are otherwise difficult to see when looking through a telescope directly. The MallinCam rapidly stacks multiple images to show fainter objects with more color than the human eye can see, further expanding guests’ experience at the Giovale Open Deck Observatory.

To help visitors learn more about astronomy, the observatory has a wide variety of well thought out exhibits These include daytime exhibits that highlight the science of spectroscopy, the types of telescopes astronomers use and how to preserve dark skies in Arizona and beyond. A set of six plinths along the perimeter of the observing plaza align to the locations of the sun during sunrise and sunset on the equinoxes and solstices.

These include exhibits that demonstrate:

– A series of six plinths that reveal nightlines to the locations of sunrise and sunset on the days of the annual equinoxes and solstices. 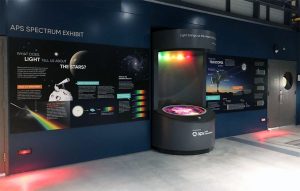 – The appearance of the sky during broad daylight and at twilight.

– The Sun and the Moon, both of which are visible during the day.

– Tools of astronomy: how telescopes work to gather and focus light, including porthole windows to the six telescopes inside the telescope hangar.

– Science-related quotes and equations that encircle the whole complex.

– The APS Spectrum Exhibit, an interactive presentation about how astronomers use spectra to determine the compositions of and distances to celestial objects.

– A giant interactive planisphere, which can be adjusted to show the constellations in the sky at a specific date and time.

– The 110 Messier Objects, representing some of the best wonders to see in the night sky (inside the Astro Lab).

– How to preserve dark skies in Arizona and beyond (inside the Astro Lab).

What about the Clark Refractor Telescope?

In 1895, Lowell Observatory founder Percival Lowell commissioned the Alvan Clark & Sons Firm of Cambridgeport, Massachusetts to build a state-of-the-art 24-inch refracting telescope. Since completion of the project the following year, the Clark Telescope has been in regular use to view the heavens and help unravel the wonders of the universe.

The Clark Telescope is one of seven structures listed in the Observatory’s 1964 Registered National Historic Landmark designation. In 1999, First Lady Hillary Clinton recognized Lowell Observatory and, specifically, the Clark, as a site worthy of preservation as part of her Save America’s Treasures program. 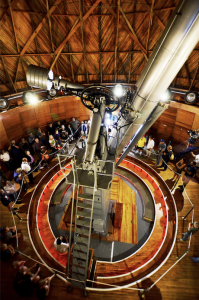 Percival Lowell initially used the telescope to further his legendary theories about intelligent life on Mars, research that brought worldwide attention to Lowell Observatory. Percival’s elegant writings about his research, based on observations made with the Clark Telescope, inspired the work of both scientists, such as rocket expert Robert Goddard, and writers, including science fiction icons H.G Wells and Edgar Rice Burroughs.

Later generations used the Clark Telescope to study double planets, moons, comets, and more. Of particular note, V.M. Slipher revolutionized our understanding of space with his observations of the expanding nature of the universe.

By the 1980s, education replaced research as the primary use of the Clark Telescope. Since then, more than two million guests have had the opportunity to enjoy the telescope by joining daytime historic tours or viewing celestial objects during the evening. In 2013, 75,000 people – including 7,500 school children – visited the facility.

From January 2014 to August of 2015, The Clark Refractor underwent a major restoration, where every  nut and bolt was cleaned and polished. The tubes were dismantled, and painted inside and out. The setting circle was given a new set of hand-painted numbers and measuring marks. Also, the glass lense of the telescope was removed for the first time since its creation to make the viewing experience through the telescope better than ever.

In 2012, Lowell launched its Kids Camp for 1st-6th grade students and in 2013 added Tykes Camp for 3 to 5-year-olds. They are now planning an ambitious long-range plan to establish the Observatory as a center for STEM (Science Technology, Engineering and Mathematics) education. The Clark Telescope is critical to the long-term success of these endeavors.