In his recently released book, “Dante and the Early Astronomer: Science, Adventure, and a Victorian Woman Who Opened the Heavens,” Tracy Daugherty tells the story of Mary Acworth Evershed, a pioneering female amateur astronomer who was fascinated with Dante Alighieri. Daugherty is a professor emeritus of English and creative writing at Oregon State University. 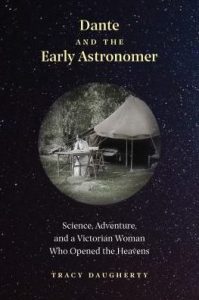 Evershed’s best-known published work, “Dante and the Early Astronomers” (the same title is used in Daugherty’s book) was published in 1913. It explored Dante’s use of astronomical imagery in “The Divine Comedy,” how it related to the science of astronomy and how it may have had an impact on the work of Galileo.

As an amateur astronomer, Mary Ackworth Orr met her future husband and young astronomer John Evershed at meetings of the British Astronomical Association and they soon were chasing eclipses from Norway to Algiers. From 1906 to 1923, the married couple worked at the Kodaikanal Observatory (which is still in service today) in the Palani Hills of southern India conducting photographic observations of sunspots and flares. At this time she became proficient with cameras and spectroscopes and made significant contributions to the still-developing astronomy field.

Daugherty’s book Dante and the Early Astronomer is available through Amazon and other online retailers.