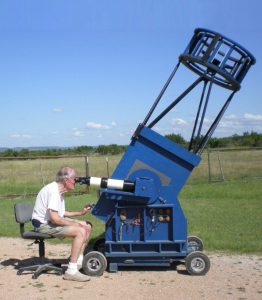 It is not often we see something that throws us off a little bit, ok a lot of bit in this instance! We were visiting the Tele Vue blog when we came across a post about Clyde M. Bone, Jr. and his custom built Mersenne reflecting telescopes.

What is a Mersenne telescope, you may ask? According to an article by Scientus.org “In 1636, Father Marin Mersenne published Harmonie Universelle, a mathematical study of music. It also proposed configurations of mirrors that could be used to produce either telescopic effects or burning mirrors. These configurations were prototypical forms of the Gregorian and Cassegrain telescopes.” There is much more fascination information about Mersenne provided in the article if you’d like to check it out.

Back to the Tele Vue blog post. According to Ted Hume who authored the in-depth blog post “Clyde M. Bone, Jr. (1928 − 2012) of San Angelo, TX was quite a character. A regular at the Texas Star Party, he was glad to show you the night sky through one of the Mersenne reflecting telescopes he designed and built himself. (At first glance, they look like giant Dobsonians ─ but they are not.) The first built was a 20-inch, which apparently wasn’t big enough! So, he followed that up with a massive 30-inch. Clyde’s version of the Mersenne reflecting telescope differs from the classic 17 century design because the light path allowed Clyde to scan the skies comfortably from the ground. There would be no “shaky” ladders like those found astride the other big scopes in the field. Also, Clyde’s Mersenne scopes didn’t output light directly to an eyepiece. No, the light would exit the side of the scope and enter a Tele Vue refractor. In this way, the Tele Vue scope was imbued with the light gathering aperture of the big 20” and 30” mirrors.”

Crazy right! There is much more information in the post, feel free to check it out!