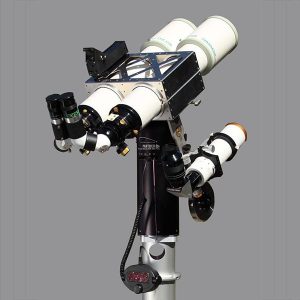 The article follows an earlier post – “Astrophotography with Alt-Az Telescope Mounts” – which explores the possibilities for taking astrophotos with Alt-Az mounts.

Feel free to check them out in the links provided.

A telescope mount has two functions. First, it should provide a system for smooth controlled movement to point and guide the instrument. Second, it should support the telescope firmly so that you can view and photograph objects without having the image disturbed by movement.

Telescopes are mounted in two ways: alt-azimuth (Alt-Az) and equatorial (EQ). Both major types allow the telescope to move freely and be pointed around two perpendicular directions called axes. An axis will always be at right angles to the motions it allows. A good example is the axle of a car. It points to the side while letting the wheels rotate and move the car forwards.

An Alt-Az telescope mount is the simplest type of mount. The mount has an altitude axis allowing the scope to be moved in an up and down direction, and an azimuth axis allowing the scope to move from left to right. These mounts are good for terrestrial observing and for scanning the sky at lower power but are typically not good for deep sky photography which is one reason Haagh’s blog post is so interesting. It can track continuously across the meridian, which many German equatorial mounts cannot do. Because it has very little or no counterweights, it’s also lighter and more portable.

As the Earth rotates around its axis, the stars appear to move across the sky. If you are observing them using an Alt-Az mount, they will quickly drift out of view. A telescope on an EQ mount can be aimed at a celestial object and easily track the daily motion, keeping it in your eyepiece. You can make certain Alt-Az mounts (CPC, NexStar Evolution, and NexStar 6SE and 8SE) into EQ mounts by the use of a wedge.

The German equatorial mount is distinguished by its large counterweight opposite the optical tube on the Dec axle. The counterweight is needed to balance the weight of the optical tube. Since the tube position is out on the end of the Dec axis, a German equatorial mount can easily hold large tubes, cameras, guide scopes and other accessories without interfering with the rest of the mount when looking at most parts of the sky.

An equatorial mount has a declination (Dec) axis allowing the scope to be moved north and south, and a right ascension (RA) or polar axis allowing the scope to be moved east and west. So far this is similar to the Alt-Az telescope mount . The key difference is that the polar axis of an equatorially mounted scope must point at or be polar-aligned to the north celestial pole, the point in the sky around which all the other stars appear to rotate. When the telescope’s polar axis is pointed at the celestial pole, it is parallel to the Earth’s rotational axis. Now the sky’s motion from east to west can be followed easily by turning the polar axis. Since only one motion is needed to track a star’s motion across the sky, this is the choice for astronomical observing and astroimaging.

It’s awkward to use an equatorial mount for terrestrial objects, as any sweep to the right and left will also have the tube move up and down. Try leveling the polar axis to 90 degrees on the latitude scale. Now the polar (RA) axis acts like the azimuth and the declination axis acts like altitude, making it easy to sweep along the horizon or elevate to look at mountaintops, etc.