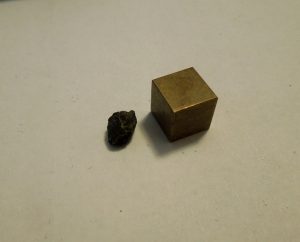 On April 23, 2019, a bright fireball exploded over the rainforest in Costa Rica. Local residents were confused and amazed at the sight of black stones falling from the sky, crashing through roofs and peppering their gardens and fields. One stone penetrated the roof of a home and destroyed a writing desk.

Word quickly spread that the meteorite was an unusual type and possibly quite valuable. A frantic search ensued as the locals combed their fields and the nearby forests. Professional meteorite hunters from around the world descended on the area and confirmed that the meteorite is a carbonaceous chondrite.

Samples of the Costa Rica meteorite were sent off for analysis and preliminary results are CM2, this is the same type as Murchison. Official classification is pending and should be completed very soon. This meteorite is the most recent fall of a CM2 type and scientists are very excited to study it. Expect new research on this meteorite to be coming out for years to come.

For collectors, this meteorite is a trifecta : it is a witnessed fall, it is a rare type, and it is a hammer fall. This is only the second witnessed fall in Costa Rica and the first since 1857.

Galactic Stone & Ironwork acquired fragments directly from a professional meteorite hunter who traveled to Costa Rica to recover them. There is a limited supply available at the company’s website.