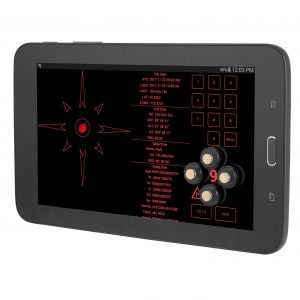 With the Explore Scientific ExploreStars App, you can connect your Explore Scientific PMC-Eight equipped telescope mounts with touch devices using Windows, Android and Apple operating systems. The platform is designed to simplify your stargazing experience through its intuitive interface while improving your skills as an astronomer.

The set of 4 buttons stick on to a touch screen with a soft-silicone rubber suction cup and can be removed and re-applied when needed. The tips of the buttons are metal and can be felt and used with or without gloves.

The new buttons make it even more intuitive to use the ExploreStars app, which has the same basic functions found in most other GOTO systems, with an important exception – the app and the command language driving the PMC-Eight is open source. This means anyone can create their own software through the available Software Developers Kit (SDK) – and you can download your newly created software onto Explore Scientific electronics.

You can create a Messier challenge. Create a selectable list of objects you want to image and program that information into the software. And share it with the community of astronomers that are using this software.

The ExploreStars App offers classic four-button pattern for guiding, centering, moving and slewing on the touch screen of a tablet or phone (made even easier with the new buttons). Users can access Selectable and User Enterable GoTo, Slewing, Centering and Guiding Rate. The app also facilitates standard 2-star alignment and 3-star alignment functions.

For stellar objects, the ExploreStars App uses the Hipparcos/Tycho II database. Where possible, the developers have cross-referenced the Bayer, Flamstead, SAO, HD/Harvard, DM, BD/CD/CPD, and GSC catalogs. The user can search by any of these designations to find a given star. When the system first starts, it loads the 2,000+ stars of magnitude 5.5 and brighter. The user will be required to load the additional 72,000+ star catalog.

For non-stellar objects, the ExploreStars App uses the RNGC/IC catalog. The system is designed so the user can update the provided catalogs and create their own catalog using tables and scripts in Microsoft Access. Also, each object has a unique ID number, so users can report errors and omissions.

You can learn more on the app and Explore Scientific PMC-Eight equipped telescope here.