The ambition of Deep Sky Chile is deceptively simple: hosting clients’ astronomical equipment under what its founders consider among the most advantageous night skies the planet has to offer: a flat mountain top at elevation 5590 feet (1700 meters) along the Río Hurtado Valley in central Chile.

Franck Jobard, one of the Deep Sky Chile project’s co-founders, is a mechanical engineer with a specialty in optics and microsystems. He began his career in a design office as an engineer in modeling and CAD in micromechanics. For more than 13 years, he then managed a structure of up to fifty employees. An astrophotographer since 2006, he built his automated observatory in 2009 and discovered his first planetary nebula (Jo1) in 2015. Franck and his family will move to Chile by the end of 2018, where he will serve as the project’s onsite engineer and its primary contact in case of maintenance and installation needs.

Cédric Thomas is a network and telecommunications engineer. After studying and working abroad for more than seven years, he returned to France in 2007 and founded his computer company, Operation PC, a company he still manages today. Cédric took his first astro-photograph in 1995, at the age of 16, during the passage of comet Hale-Bopp. In 2008, he built his remote backyard observatory, which still houses his setup, along with those of friends. Thanks to the Internet, they all control their equipment remotely.

The project is assisted by Alain Maury, who heads SpaceObs, a company he founded 15 years ago in the Atacama Desert. Alain offers tourist accommodations in high-end lodges and receives public for astronomical tours. He also hosts robotic telescopes for his customers but has now reached his maximum capacity and cannot accept more clients. Alain is the consultant and business contributor to Deep Sky Chile, who brings more than a decade of relevant hands-on experience to the project.

The project is also assisted locally by Vigney Gonzalez Rojas, its Chilean legal representative, who lives near the site of the observatories.

Why the Rio Hurtado Valley?

Although the Deep Sky Chile team evaluated other potential locations in Atacama and the Elqui Valley, both of which have excellent worldwide reputations among astronomers, the international popularity of those sites put them at risk of increasing light pollution as they attract ever-greater numbers of tourists. The Rio Hurtado Valley does not, for now, present this risk, and the site’s proximity to the Cerro Tololo and Gemini South observatories should mitigate that risk. 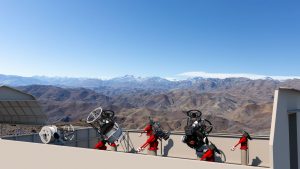 The of the site ultimately chosen by the team, 5900 feet (1700 meters), was judged high enough to be above the inversion layer, but not so high as to threaten year-round accessibility to the site.

Located on a flat mountain top near the Rio Hurtado Valley in the Coquimbo Region, the site offers 360-degree access to the sky. It is several hundred feet above its surrounding terrain in all directions, allowing the prevailing westerly winds to pass smoothly over the site. Therefore, the airflow is laminar, allowing the best possible seeing conditions.

The FWHM median value of seeing conditions there is less than one arc second – average seeing is reported to be approximately 0.5 arc second in summer and 0.6 arc second in winter, with the best measured to date at 0.37 arc second.

Despite these benefits, the site is just one hour 40 minutes from Ovalle or two hours 30 minutes from La Serena, with high-speed Internet access.

But none of these factors matters if the skies aren’t clear, and these are; the Dark Sky Chile team reports 320 clear nights annually. Bottom line: There are few sites in Chile – indeed, in the world – that enjoy more clear nights.