BOSS Supernova Search: With each new advancement in the technology available to amateur astronomers, the line between amateur and professional – already barely distinguishable – is further blurred.

There may be no better example than the feats of a group of amateur astronomers who call their group the Backyard Observatory Supernova Search (with the enviable acronym “BOSS”). The BOSS Supernova Search , consisting of Greg Brock, Peter Marples, Stuart Parker, Brendan Downs, Pat Pearl and Colin Drescher, is credited over 140 supernova discoveries … and counting. 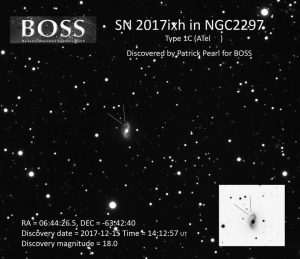 Inspiration can be found wherever dedicated amateur astronomers share their experiences, and you’ll find several lifetimes worth at the BOSS website.

What is a Supernova?

Supernovae are stars that have reached the end of their life in a very dramatic fashion, but they are, essentially, just stars like our own sun. Okay, many potential supernovae are actually half of a binary star system and many would make our sun look very small indeed, but they are stars just the same. As our sun is not in a binary system and not a massive star, it will end its life far more peacefully fashion.

A lot of people ask me when I am talking about supernova “will our Sun explode as a Supernova The answer here is no .Our sun is too small to explode as a supernova it will instead have a far more peaceful death.

Our sun is a middle ages lower mass star in our galaxy it has been happily burning through its supply hydrogen for billions of years. Scientists believe that 5 billion years in the future our suns supply of hydrogen fuel will run out.

Nuclear fusion will stop and gravity will start to crush the sun. It must find a new source of fuel it has helium but it must be very hot 10x hotter that during its life time. As the star is being crushed the gravity causes it to become superhot and allow at 180 million deg it can start to fuse helium into carbon this process takes about 100 million years then it is in real trouble. The extreme heat caused by helium burning causes the outer layers of the star to swell. These layers are so weakly held by gravity that the outer gases are ejected as shells of gasses outward which is illuminated by the hot central star.

That will cause the PN effect beautiful shells of glowing gas surrounded but the dying core of the star. After the outer layers have been expelled  the core of a sun like star is crushed to the size of about the earth gravity can no longer crush the core any more this will leave what is known as a white dwarf which is very dense a teaspoon of material would weigh several tons here on earth. A White Dwarf is the final stage of sun like star it will continue to shine for billions of years as it slowly radiates out a life time of energy. This is what will happen to our sun.

But some white dwarfs when they are part of a binary star system can have a very different fate. If a white dwarf is part of a binary system the small but very dense white dwarf has such a strong gravitational pull that it can suck of hydrogen gas off the companion star and if it starts to grow in mass it will evenly grow to a point that it will become unstable this limit is about 40% bigger than our sun at that point the white dwarf undergoes a massive explosion where the whole thing goes off in a blinding flash which is called a thermal nuclear runaway which destroys the star.

This is known as a Type1a Super nova. Remarkably, the nearby secondary star in a Type Ia supernova explosion actually survives! A few hours after the white dwarf detonates, its companion star (probably a red giant) feels the force of the explosion. Within days, the shock wave will have affected every part of the companion star and weeks later half of the companion’s mass (i.e., its outer atmosphere) will have been blown into space.

However, the companion’s core will (probably) have survived. Type Ia SN contain no hydrogen. The best theory to explain this is that the stellar winds  have blown the outer layers/hydrogen away prior to the supernova explosion.

This is only one way a supernova can explode.

Type II supernovae are thought to be the result of the destruction of a single massive star after the collapse of its core. Types II supernovae are only found in the arms of spiral galaxies. This immediately suggests that they are all associated with massive, relatively short-lived stars, because that is where such stars are found .What do we mean by a massive star that may evolve into a supernova? Well, typically, astronomers class stars of between 8 and 100 solar masses in this category but 20 to 30 solar masses is probably more common.

Unlike the Type 1a SN the more massive stars after they have exhausted their supply of hydrogen  have the ability to fuse other elements the ashes of each nuclear recitations become the raw fuel for the next  reactions causing layers of heavier and heavier elements and lastly forms a core of iron. The iron core builds up without fusing and eventually becomes unstable. When it reaches about 1 ½ the mass of the sun it collapses. This is unbelievable violent within half a second the core the size of the earth is crushed into a object roughly 20km across which smashed into the outer layers of the star starting one of the massive explosions in our universe since the big bang. The end state after gravity has crushed the core to the size of only a few km across is a neutron star.