Erik Wilcox lives off the grid on the Big Island of Hawaii, and has been observing for over 20 years. When he’s not viewing from his dark backyard sky, he works for a natural foods chain, and spends his spare time hiking, kayaking, snorkeling, and performing music.

Due to primarily using Dobsonians and altitude/azimuth scopes, I’ve long enjoyed and preferred wide-field eyepieces to the standard 40-50 degree oculars. And with the continued advancement in optical coatings, I’ve found that light transmission loss from eyepieces that incorporate more lens elements has become less of a concern.

So, when I was asked to review the 17-mm and 12-mm Explore Scientific 8-Element 92-degree eyepieces, I jumped at the chance.

The two eyepieces arrived in a hefty shipping box. Inside, they were well-packed in another box and inside that, a nice velvet drawstring pouch surrounded by fitted foam. The eyepieces themselves are beautifully put together; they have exquisite build quality and nice attention to detail. The raised ES logo on each eyepiece gives the user a sense of the premium glass tucked inside. The lens caps fit on nicely, which, although it is something that should be expected, isn’t always the case. I couldn’t wait to get these outside under the stars! 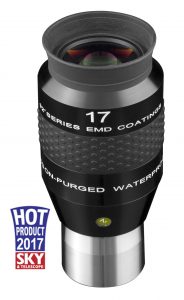 First light came, and I spent several hours getting comfortable with the eyepieces, as well as comparing them to various other eyepieces in my personal arsenal. Though the 17-mm and 12-mm share very similar performance characteristics (I suspect these two eyepieces utilize the same design and just scale it down for the 12-mm), the 17-mm ES quickly became my favorite of the two.

This is mainly because of the “sweet spot” it provides in my 16-inch f/4.5 truss tube Dobsonian. With the Tele Vue Paracorr coma corrector installed, this gives the 17-mm a magnification of 120x and a true field of view of just over 0.75-degree. That is wide enough to view many extended objects as well as providing enough magnification to pick out detail on not only DSOs, but also planets.

Of course, an effective focal ratio of 5.1 (with the installed come corrector) is pretty rough on eyepieces, especially those with edge-of-field issues. And given that the ES 92-degree eyepieces are very reasonably priced, how would they perform? Pretty darn well, I’d say.

Stars are literally perfect out to about 10 percent from the edge of field. The outermost 10 percent does start to show a touch of astigmatism at f/5.1, but the level is such that it likely wouldn’t be noticed, unless you were specifically looking for it. Brighter stars also show a touch of bluish/violet color fringing (which is common on many much more expensive eyepieces as well) right at the edge of the field stop.

I was especially impressed at the lack of field curvature in these eyepieces. Objects remained in focus nearly to the field stop and stars remain pinpoint right up until the mild astigmatism starts to take effect about 10 percent away from the edge of field.

One of the selling points of the ES 92-degree eyepieces is the long eye relief. There’s definitely no argument there! The eye relief is extremely forgiving, and eye placement isn’t critical like with many competing eyepieces in this price range. I don’t wear glasses, but with 20 mm of eye relief, it would be hard to imagine anyone with glasses having trouble using these eyepieces. 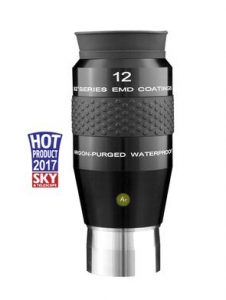 The eye lens itself is physically large and makes for very comfortable observing. If I tried hard enough, I could get the eyepiece to “black out” and “kidney bean” a bit, but it’s not something that’s much of a concern in normal usage. Even during daylight hours, I had a hard time getting either eyepiece to “black out.” This was welcome news, because the blackout effect is a deal breaker for me when it comes to eyepieces; I was glad to see that wasn’t an issue with the ES 92 degree eyepieces.

One of the things that was interesting to me is the different “feel” the ES eyepieces have when compared to others with similar specs. I noticed that because of the physically large eye lens, I could see just about the entire field of view without moving my eyes around to take it in. This is a very interesting effect and decidedly different than what I’m used to with ultra-widefield eyepieces, where you often have to pan around with your eye to see everything. It took a bit of getting used, and I feel like this might be a “personal preference” sort of thing.

Light throughput with these eyepieces is quite excellent. Despite using an exotic design incorporating eight optical elements, objects viewed through the 12-mm ES actually appeared slightly brighter to my eyes than viewing the same object through an old four-element 12-mm Plössl that I keep around for such comparisons. The ES are advertised as being fully-multi-coated, and the advanced coatings certainly seem to be doing the job. When comparing them to other premium eyepieces in my personal collection, I could see no difference in brightness. The number of elements in the ES 92 degree eyepieces should not be a concern for anyone worried about light loss.

When going back and forth changing eyepieces for comparison sake, I quickly realized how physically large the 17-mm ES is. It is also quite heavy with all that exotic glass inside. It tips the scales at 45 ounces (1275 grams), so this is an eyepiece that might require a bit of counterbalancing in some scopes. The 12-mm comes in at 38 ounces (1077 grams), so it’s not far behind in weight. The weight and girth of these eyepieces certainly wasn’t an issue in my big Dob, but I did have to tighten up the tension on the alt-az mount when using my 8-inch Newt and 80-mm refractors. The 17-mm is an especially large, yet at the same time, physically impressive looking eyepiece. But the weight may be a concern to some.

Though the Explore Scientific’s are advertised as having a 92-degree apparent field of view (AFOV), I honestly couldn’t see a difference when comparing the 17-mm ES to a high-end 100-degree 17-mm eyepiece of a different manufacturer. I spent a good amount of time placing stars at each end of the fields of view of both eyepieces, and although it’s not an exact measurement, it sure convinced me that these eyepieces are much closer to 100 degrees than 92 degrees.

After a few viewing sessions, I found that I’d often just leave the 17-mm ES in the focuser of my little 80-mm refractor. It became the perfect “quick-look” companion. On many nights, I prefer to do “lazy stargazing,” where I mindlessly pan across star fields until I find something really interesting. Then I’ll look at my maps and determine what the object is.

I often find this method of stargazing more relaxing than having a set plan with a specific list of objects. An eyepiece like the 17-mm is perfect for this type of thing, because it provides an extremely wide true field of view, yet still has enough magnification (32x in my little refractor) to pick out some detail in a variety of different objects.

Given that the ES 92-degree eyepieces are advertised as being “waterproof,” I do have to admit that I thought once or twice about taking them snorkeling. But I thought that might be pushing the boundaries of good taste! Though I didn’t test their water resistance in such a manner, I can say that they held up well on quite a few damp- and dew-filled Hawaiian nights.

Dew can be a real issue here in Hawaii and is often the only downside in observing under such a dark, pristine sky. I’ll often open my observatory and let the scope cool down, and if I don’t remember to keep the eyepiece case closed, they can become quite a mess. That said, the ES eyepieces held up well, and any dew was contained to the outside of the eyepieces. Despite the large eye lens (or maybe because of it), they also didn’t seem to fog up badly under normal use.

Overall, I’m very impressed with the two Explore Scientific 92-degree eyepieces, and they definitely break new ground from a price/performance standpoint. They are truly premium eyepieces with exceptional build quality. They would make an excellent addition to anyone’s eyepiece case, and the only concern I’d have with them is their weight.

This was my first experience with this particular line of ES eyepieces, and I wasn’t initially familiar with their cost. Given their performance, I expected them to be priced much higher than they are. I was a bit shocked when I discovered their retail price of just $489 each and I just saw where they are on sale (at least at the time this article was published) on the Explore Scientific website for $389.99. It’s a great time to an astronomy enthusiast and at that price, you’ll probably want to buy both of them!