Virtual Planets Atlas Version 2 (VPA Pro 2.0) is the second release since the software’s introduction in 2013. The tool allows users to study topographic and scientific data for planets and satellites surfaces. 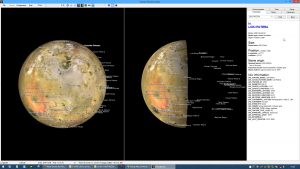 It is published by Christian Legrand, a lunar observer, and co-author of the guide “Discover the Moon” by Cambridge University Press and Patrick Chevalley, author of the planetarium software Cartes du Ciel. The duo is the same team who publishes the Virtual Moon Atlas software which offers a database with more than 60 000 entries of topographic and scientific data of the Moon’s near side and far side.

The Virtual Planets Atlas offers data as it becomes available for telluric planets and Solar System satellites. The data is made available from the fleet of performing probes sent by the various space agencies (USA, Europe and others). The release of version 1 included Mercury, Venus and Mars. New for Version 2 is the addition of Jupiter and its four Galilean satellites.

VPA Pro 2.0 is available as a free download for Windows, Linux and MacOs at http://www.ap-i.net/avp/en/start .